I was eight years old the first time I saw the Pride March(also affectionately known as the Pride Parade). My mom and I had gone for a walk. When I overheard upbeat dance music; I rushed over and saw a bunch of adults in sequence costumes. Excited, I turned to my mom and said, “Look it’s a costume parade for grown-ups!” However, my mom was at a loss for words; unsure how to explain what was transpiring. As soon as I saw two men loving holding hands and supporting their fellow LGBT compatriots for being out & proud- it hit me! I realized what the parade meant.

The positive energy was contagious as I cheered alongside them. It was the early 90’s. Thanks to a PBS medical documentary, I’d learned about HIV/AIDS and the cruelty of homophobia. As I observed the crowd cheering; I felt that it was a golden moment. A moment to live openly; before going back into the closet the next day. After 20 minutes, my mom quietly told me it was time to go home. I wanted to stay. It wouldn’t be until years later that I learned certain parts of the parade aren’t meant to be viewed by young children.

Of course, times have changed. There have been great strides in LGBT civil rights, including the Supreme Court’s legalization of same-sex marriage in 2015 and creation of the Stonewall National Monument in 2016. There have also been a few steps backward, including the recent Supreme Court’s decision on Masterpiece Cakeshop v. Colorado Civil Rights Commission; giving creative professionals the right to refuse service based on religious liberty. It’s moments like these in LGBT history that feels so close yet so far.  Only echoing the cry of frustration, “I didn’t come out of the closet for this shi*t!” There’s also the additional backlash “Why isn’t there a Straight Parade?”– Pride is just a big party. This year’s Pride theme, “Defiantly Different” is a call back to Pride’s protest roots.

One early morning in 1969, police raid the Stonewall Inn; a Greenwich Village bar was a staple of the NYC underground gay community. This time, enough was enough as community members fought back, hence the Stonewall Riots. The Stonewall Riots are considered the birth of the modern LGBT movement.1  Today, both marchers and spectators showcased signs of love & solidarity along with signs of resistance.

A yellow truck; with a rainbow banner stating, “NY State Leads The Way”  opened the path for numerous New York local and state politicians. All demonstrating their unwavering commitment to the LGBT community. Riding the rainbow wave was Governor Andrew Cuomo, Mayor Bill de Blasio, with his wife, First Lady, Chirlane McCray, Senator, Brad Hoylman along with New York City Council and many others.

Cynthia Nixon, actress turned democratic governor candidate, stole the show as she marched and took the time to greet spectators on both sides of the barricade.

As the sun shined brightly, there where water tables set from the 10-13th street. Volunteers holding trays walked the route handing out cups to kept marchers, press, anyone else who needed hydration. (Thank goodness too. I almost passed out from the heat.) 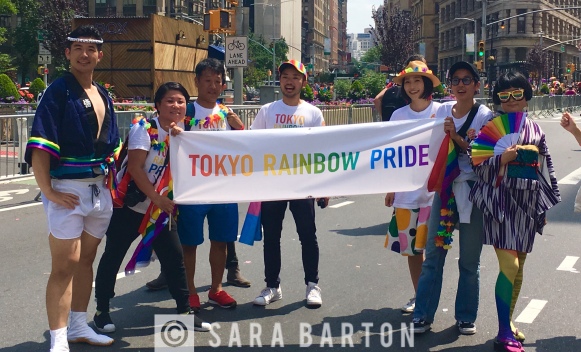 Pride 2018 adheres to its protest roots, yet, this year, it’s traditional route was changed is to prepare for next year’s massive, month-long World Pride event.2 Along with celebrating the 50th anniversary of the Stonewall Riots. It’s the first time World Pride will be hosted in the US and more than 3 million people are expected to attend. The Pride March went in the opposite direction starting in Chelsea, looping through the Village; going past the legendary Stonewall Inn, then heading uptown through 5th avenue finishing on 29th street. The NYPD also added extra pedestrian crossings and placed helpful blue flags to mark them. 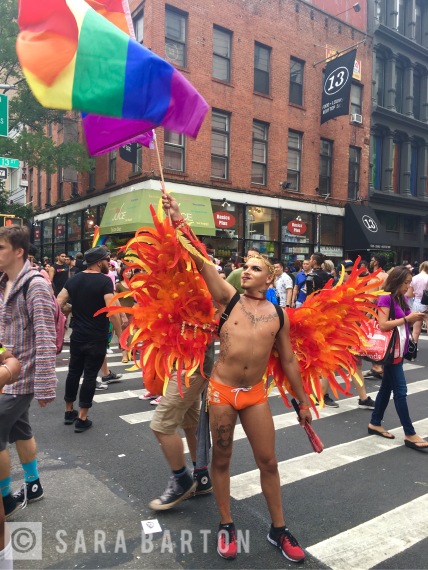 Pride Fest location was changed this year as well, relocating to University Place. It was a smart move; spectators could watch the march and go to the festival without the hassle of going through multiple pedestrian crossings. I remember Pride Fest 2012; I had to go through an epic maze of barricades throughout the West Village. It felt like an impossible task. (At one point I got trapped on Christopher Street.) The new location is ideal for movement; the drawback, there wasn’t enough space, it became overcrowded very quickly.

To help marcher with the new route, volunteers held signs from 26-29 street. As FDNY marched to towards 29th street, a few EMT’s smiled and waved me, saying, “Happy Pride!” For a minute, I forgot that I was press, removed my hand from the camera and ecstatically waved back in acknowledgment. They seemed surprised. I think they wanted me to shoot their photo. I goofed, even members of the press needs a moment to celebrate.

Since I first saw the parade, I knew I wanted to be in it. Of course, back then, I had no idea how it was going to happen. When I became a journalist, I’d asked to cover Pride, only realizing that I didn’t have NYPD press credentials.3 I registered to be in March a few times, only to be struck by medical misfortune. In 2017, I finally got my NYPD credentials; yet I had to watch from the sidelines once more; I was in agony from an old injury.

This year I was determined. Yes, I had to go back to physical therapy again, but it was the last straw. I prayed, give me 4-5 good hours to run the route, let me work my journalism magic. I did it! I showed my NYPD Press Credentials; walked through the barricade, then shot the breeze with the top dogs, press photographers from The New York Times, The Advocate, etc. As the action started, I got a piece of advice, “Don’t overthink it, Just dive in!”  That’s what I did; I was out in the sunshine and shooting photos of marchers. I was happy; childhood moment achieved. It was the best day of my life! 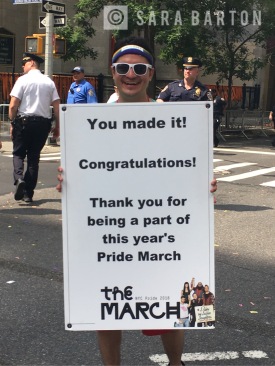 <2> What is WorldPride? WorldPride is a culturally-diverse expression of the quest for equality and liberty of Lesbian, Gay, Bisexual, Transgender and Intersex (LGBTI) people worldwide. It exists to rally the LGBTI communities on a global level, thereby promoting our universal quest for freedom and human rights. (source: InterPride WorldPride committee)

<3> NYPD Press Credentials are a requirement for the press to cover events that have police or fire lines/restrictions established for security or crowd control; such as parades, protests, emergency or breaking news events.