On January 21, millions gathered around the US to advocate for equality, health care, love, and solidarity for the Women’s March. What originally started as a march on Washington, DC spanned nationwide from New York, Philadelphia, Portland, Austin, Chicago, and Minneapolis, to name a few (there were at least 673 “sister marches” across the county), making it one of the biggest one-day protests in US history.

Did you participate in the #WomensMarch this weekend?

While this journalist has been fortunate to be in the right place at the right time, lately it’s been quite a struggle. This brings up an interesting question, how do you fight injustice when your chronic illness or invisible disability (1) becomes cumbersome? 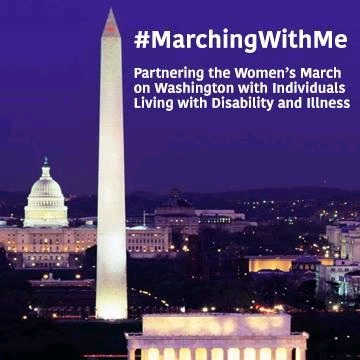 Suffering the Silence developed an ingenious solution, called #MarchingWithMe. In collaboration with the Women’s March, people who were unable to attend sent a photo of themselves and were paired with a marcher. The marcher would wear or carry their picture as a sign of solidarity and to raise awareness for chronic illness and disability rights.

“Suffering the Silence (STS) is a 501(c)3 organization dedicated to leveraging the power of art, media, and storytelling to raise awareness around the life experience of people living with chronic illnesses.” What started as a book by Allie Cashel, describing her experience with chronic Lyme disease, has blossomed into a mission to empower others with chronic illnesses, build a community, and transform medical and social perceptions of them. 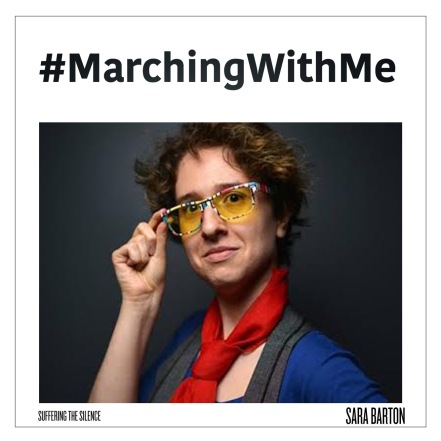 I was excited to participate, but I’m very camera shy (the irony!). So, I asked Suffering the Silence if there was an alternative and they were kind enough to accommodate. After much debate, I sent in my favorite photo; which was taken by Village Voice photographer, C.S. Muncy when I covered NYCC this year (3). I was cosplaying as Radio Times reporter, Jilian Holtzman, from Ghostbusters (2016). I couldn’t have asked for a better photo and the queer feminist pop culture reference was the icing on the cake.

This isn’t the first time I’ve volunteered for Suffering the Silence. Over the summer, fellow spoonies (2) and I participated in photo-shot for their campaign to help them become an official 501(c)3 nonprofit organization. Mission accomplished!

In addition to taking our photos, we’re asked to pick a quote or mantra that inspired us. I chose, “Suit Up, Again!” from the Toonami promo for the anime series, Gundam Wing. (They loved the reference!) It was a pleasure to work with them, and I was ecstatic to help out again.

I received an email from Marching with Me coordinator, Jacqueline Rasposo. I was paired with my marcher, Susan, who attended the Women’s March in New York. We exchanged social media handles in order to hashtag and share photos to spread awareness. I loved how she ended each email with, “In Solidarity with the Resistance!”

Joining Marching with Me gave me an option to feel included and empowered. Yes, I would have loved to have marched or to have covered the protest in person. Nevertheless, Suffering the Silence gave me a unique opportunity to be a part of a dedicated community striving to make a difference. In journalism, we strive to be objective, yet this was my time to strive to be personal and share my story.

The Gundam Wing quote has deeply resonated with me throughout the various phases of my life. When I developed my invisible illness, it became the mantra I think of every-time, I have to head to the ER. Every time, I have to suit up, again and again, to fight another medical battle. Now, after the Women’s March, I see it with another layer of context. It’s a sign of the times, that in order to protect our rights, we’re all going to have to “Suit Up, Again!”

Dedicated those who “Suit Up, Again” to fight injustice

(1) Chronic illness/invisible illnesses/invisible disabilities: are interchangeable terms to describe illnesses that are often invisible (to most people). The daily feeling of being invisible can be one of the most challenging parts, especially since one can appear healthy and able-bodied. Invisible illnesses can range from asthma, food allergies, multiple sclerosis, lupus, Lyme disease, neuropathy, fibromyalgia, or brain injuries, and also includes mental illness such as G.A.D, PTSD, bipolar, and depression.

(2) Spoonies: A person living with chronic illness who identifies with Christine Miserandino’s Spoon Theory. The Spoon Theory measures a person’s daily abilities much as one would measure the proper amount of spoons needed for an event or occasion, sometimes having an abundance, other times coming up short.